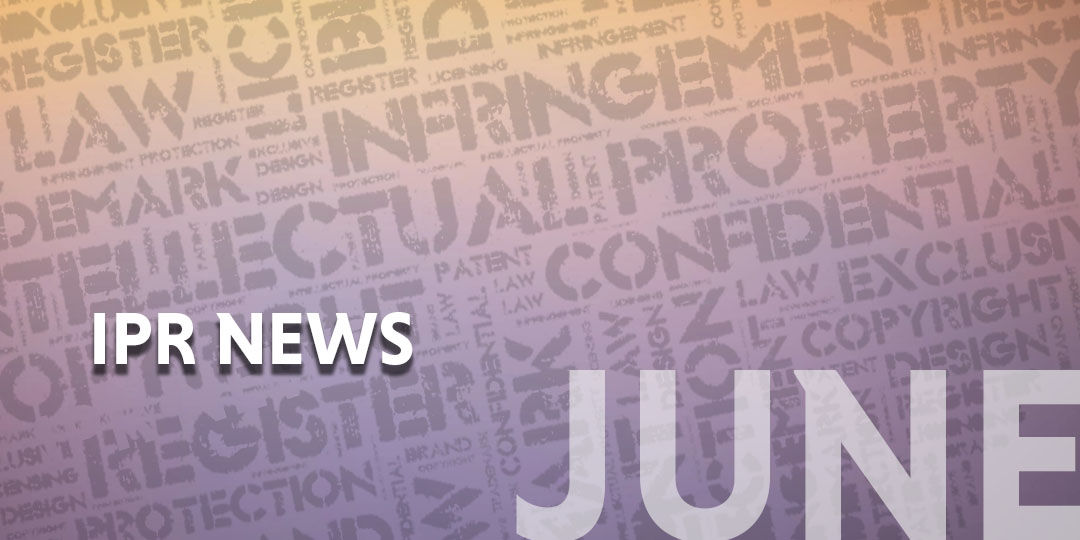 OHIO STATE UNIVERSITY REGISTERS “THE” AS A TRADEMARK

The term “THE” has been successfully registered by The Ohio State University in relation to apparel that the university wears during athletic activities. The United States Patent and Trademark Office (USPTO) initially rejected the registration on the grounds that the University was only using the mark ornamentally and that there was a likelihood of confusion because the fashion house Marc Jacobs had previously filed a trademark application for an identical mark in relation to clothing items. But Ohio State was able to demonstrate that the mark was being used more than purely ornamentally, and they also managed to get Marc Jacob’s permission to register the mark.

In the case of Intas Pharmaceuticals v. Intra Life Private Ltd., the Delhi High Court has issued an order prohibiting two pharmaceutical manufacturing companies from using the mark “LOOZOUT” in the production, sale, advertising, or promotion of their goods. Additionally, it restricts them from using any mark that is confusingly close to or identical to the mark “LOOZ” registered in the Plaintiff’s name.

The Delhi High Court ordered banning access to the website and suspended the defendant’s use of the domain name “www.myvoltascare.com” in response to a trademark infringement lawsuit brought by the home appliance manufacturer Voltas. In order to prevent the defendant from utilizing the plaintiff’s trademark and seeking permanent injunction against infringing the company’s registered mark through the nearly identical website the plaintiff had initiated the lawsuit. The Plaintiff also claimed that the infringer had copied its website as a whole including the look and colour scheme which could confuse the consumers. The court concluded that the Plaintiff had a prima facie in its favor and opined that the defendant’s activities were detrimental to the company.

HYDERABAD LAC BANGLES TO BE GIVEN GI TAG

The Creasent Handicrafts Artisans Welfare Association of Hyderabad has submitted an application to the Geographical Indications Registry in Chennai to have the lac bangles made in Hyderabad given a GI tag. The application has since been accepted for registration. The artists create these bangles by hand in their houses using molten lac.

By decision dated 3 June 2022 in Vishal Pipes Limited v. Bhavya Pipe Industry, Justice Pratibha Singh of the Delhi High Court declared that all IPR issues, regardless of their values, shall be placed before the commercial district court judges. If the subject IP is valued at less than 3 lakh rupees, the court will determine whether or not the valuation is accurate. The district commercial court will handle the lawsuit as a regular civil matter if the worth is determined to be less than 3 lakh rupees. According to the Commercial Courts Act, the lawsuit will be classified as a commercial litigation if the valuation is determined to be greater than or equivalent to 3 lakh rupees.

‘Compulsory licensing for expensive medicines’ is the title of an insightful report that was just published by the Belgian Health Care Knowledge Centre (KCE). Covid-19 has considerably increased public awareness of intellectual property rights and their significance to the pharmaceutical industry. The report focuses on the possible use of compulsory licenses for “excessively expensive” pharmaceuticals outside of emergency situations rather than on compulsory licenses in emergency situations like the pandemic. The research recommends a case-by-case approach to compulsory licensing as well as a cautious approach due to the unpredictability of their potential impacts.

The Northern District of California district court allowed Twitter’s move to quash the subpoena issued in accordance with section 512(h) of the Digital Millennium Copyright Act on June 21. Twitter received a subpoena from the plaintiff, Bayside, asking details about the person responsible for the @CallMeMoneyBags Twitter account. Twitter filed a motion to overturn the subpoena on the grounds that disclosing the user’s identify would be against the First Amendment. The court determined that the subpoena “must be quashed” because the plaintiff “has not established a prima facie case of copyright infringement, and for the independent reason that the user’s constitutional interest in anonymity outweighs Bayside’s expressed interest in his identity (at least on this record)”.

The Fifth Circuit Court of Appeal’s ruling, according to Epic Sports and Michael Bynum, places copyright holders “at the mercy of state infringers.” On June 15, they appealed their infringement lawsuit against Texas A&M University and two school officials to the U.S. Supreme Court. The university corporation allegedly duplicated an unpublished portion of the copyrighted book about the institution’s “12th Man” tradition and put it to their website without authorization, according to the petitioners, who initially filed action in the Southern District of Texas. Following the district court’s decision to reject the infringement allegations, the Fifth Circuit Court of Appeals declined to rehear the matter en banc.

ORACLE AWARDED $30 MILLION AGAINST HP IN A COPYRIGHT LAWSUIT

On June 14, a California jury decided that Oracle’s lawsuit against Hewlett-Packard for copyright infringement should be dismissed. Oracle filed a lawsuit against HP in 2016, claiming that HP willfully ignored the fact that Terix, its IT support provider, was installing illegal upgrades of Oracle’s Solaris software for clients. Additionally, the jury determined that HP was responsible for both direct and vicarious infringement but not contributory infringement. A $24 million award for HP’s willful interference with Oracle’s contracts was also determined by the jury.

Six pirate websites that were registered with a U.S.-based registry or domain registrar have been taken down, according to a June 27 announcement from the U.S. Department of Justice (DOJ) and Homeland Security Investigations (HSI). The websites were noted as part of the federal government’s cooperation to combat copyright infringement with Brazilian and U.K. authorities and police forces. By making these works available for streaming or downloading and occasionally releasing works before their commercial release dates, the websites illegally distributed music content. The aggregate monthly viewership of the six websites were believed to be over 5 million users.

This case was recently decided by the 15th chamber of the Provincial Court of Barcelona, and in its ruling, which revoked the first instance acquittal, the court confirmed that the defendant had used a sister company as a proxy to evade the confidentiality agreement it had previously signed for knowledge of the plaintiff’s trade secrets. The family that owned the hotel sold its interests to a new operating business for a staggering sum of 5.7 million euros just one year after the NDA was signed. The verdict indicates that the defendant utilized that sister business as a proxy to, with the knowledge already gained to secure the management of the hotel. Because of the costs associated with the compilation of the numerous viability reports for the firm, the plaintiff suffered losses in excess of 123,000 euros and lost a commercial opportunity that the court assessed at 4.1 million euros.

CANADA AND NEW ZEALAND INCREASE TERM OF A COPYRIGHT

On June 23, the Canadian Parliament approved a bill extending the life of the author plus an extra 70 years as the period during which literary, theatrical, musical, and artistic works are protected by copyright. The new law’s implementation date has not yet been decided, and the term extension will also not be applied retrospectively. This comes at the same time as New Zealand extending the term of copyright protection for writers, producers, and performers by 20 years, for a total protection period of the author’s lifetime plus 70 years.

GOOGLE AND FRANCE SETTLE THEIR DISPUTE OVER NEWS COPYRIGHT WITH AGREEMENT

Three years ago, Agence France-Presse (AFP) and organizations that represent French periodicals and newspapers filed a complaint with the regulator. The long-running issue was resolved on Tuesday when French regulators accepted Google’s promises to appropriately negotiate copyright terms with news organizations. Within three months of receiving a copyright complaint, the US internet giant is required by the agreement to make a clear offer of payment to news organizations. The framework is a step in the process of implementing a 2019 EU rule on “neighbouring rights” that seeks to rein in digital platforms that use media material excerpts without getting paid.

On June 29th, it was announced that the public-accessible USPTO Patent Center system, which has been in use since 2017, will completely replace the dated Public Patent Application Information Retrieval (Public PAIR) tool for the electronic submission and administration of patent applications as of August 1, 2022. On July 31, 2022, the Public PAIR tool, which was introduced in the early 2000s, will be formally discontinued. Patent Center integrates all of the services that were formerly part of Public PAIR, in addition to delivering greater system performance and a more user-friendly interface.

Donald Sadoway, a professor of chemistry at MIT, received the 2022 European Inventor Award in the category of “Non-EPO countries,” while Erin Smith, a student and scientist from the United States, took first place in the first Young Inventors category. Kathi Vidal, the director of the United States Patent and Trademark Office and the under-secretary of commerce for intellectual property, publicly acknowledged the extraordinary accomplishment of these American inventors.

Entertainment One won its appeal against the rejection of a charge of infringement involving its Peppa Pig properties in Russia by a Russian arbitration court. The appeals court reversed the initial judgement (Case А28-11930/2021) and backed the entertainment firm and awarded compensation for multiple infringements after considering the case’s circumstances and the evidence provided by Entertainment One. Niall Trainor, senior director of brand protection at Entertainment One, stated that that the earlier verdict was an “aberration”. The judgement may be appealed. However, Peppa Pig’s latest triumph should give rights holders reassurance about appealing judgements such as the one made in the earlier case.

In a case involving trademark infringement and unfair competition, the Guangzhou Intellectual Property Court ruled in favour of SEIKO HOLDINGS CORPORATION (“Seiko”) against Guangxi Tianrui Precision Electronics Co., Ltd., Hunan Tianrui Precision Technology Co., Ltd., and Guangzhou Qianding Import and Export Trading.  The defendants were obligated to pay RMB10 million (USD1.49 million) in damages after the court found that the defendants had violated Seiko’s trademark and engaged in unfair competition. The lower court’s ruling that the defendants violated Seiko’s trademarks and engaged in unfair competition with Seiko was upheld by the Guangzhou IP Court.

On 20th June, for the first time in a number of years, the UKIPO declared that all of its examination backlogs had been resolved. Backlogs refers to instances that take longer than IPO’s service requirements. It comes after the IPO’s two busiest years, during which a record amount of applications and modification requests were submitted. Customers of IPO now receive speedier service as a consequence of backlogs being cleared. Customer satisfaction with the IPO’s speed of service for patent examination has virtually quadrupled over the past three years, going from 42% in 2019 to 75% in 2022. In March 2022, IPO received an overall customer satisfaction rating of 88 percent, ranking among the greatest in the UK for any industry. Additionally, it surpasses the Ministerial Goal of 85%.

A German court ruled that when online service providers like YouTube fail to take sufficient action over the infringement, they may be held accountable for the illegal behaviour of its users. The court’s decision is based on the Court of Justice of the European Union’s (CJEU) interpretation that online service providers may be held accountable for their users’ violations of copyright laws if they act with “full knowledge of the consequences” with the intention of granting the general public access to works that are covered by such laws.

On June 15, the World Trade Organization (WTO) published its final Ministerial Decision exempting some Member nations from certain IP obligations and rights under the Agreement on Trade-Related Aspects of Intellectual Property Rights (TRIPS Agreement). The completed waiver excludes copyright law and is specifically geared to patent rights relating to the manufacture and distribution of COVID vaccines. The waiver is subject to an annual review by the General Council of the WTO and will last for 5 years (with a potential extension). In addition, the WTO will review any extensions involving COVID diagnostics and medicines in six months.