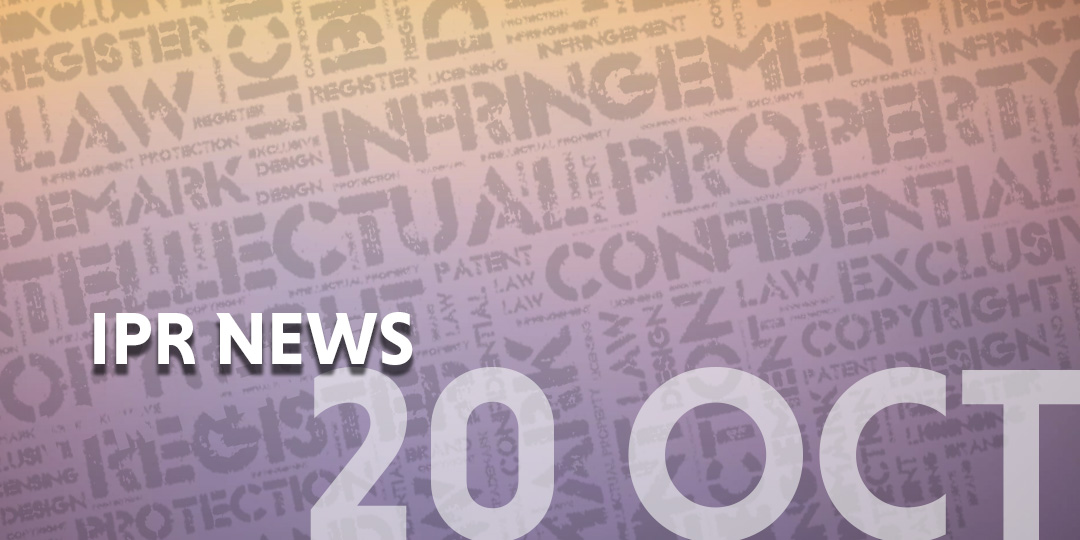 The Hon’ble Chief Justice of Delhi High Court had announced the creation and functioning of a separate Intellectual Property Division which would solely deal with the IP matters in July, 2021. On 8 October, 2021, the Delhi HC had circulated the IPD Rules, 2021 among the members of the bar for their suggestions and recommendations. The IPD Rules, 2021 deals with the practice and procedure for the exercise of the original and appellate jurisdiction of IPAD and for other miscellaneous petitions arising out of specific IP statutes.

The Department for Promotion of Industry and Internal Trade (DPIIT) has sought views on the issues faced by the stakeholders in relation to IPR and the different procedures and steps involved, intending to raise the concerns and difficulties faced before the US in the meeting which is to be held in the third week of October, 2021.

During the G20 Trade and Investment Ministerial Meeting, Minister Piyush Goyal emphasized that that one of the ways to dismantle trade barriers during this pandemic situation, especially in relation to the vaccines is by accepting the TRIPS waiver proposal. He underlined the requirement for an early universal vaccination against COVID-19 and mentioned the importance of the IPR waiver in making health services accessible and more affordable thus enabling free flow of health services.

An FIR for cheating and extortion was registered against two Mumbai-based private firms for extorting Rs1.37 lakh from businessmen under the pretext of issuing them copyright licences for staging musical performances at marriage ceremonies and functions in a star hotel in Pune last week. Following this event, the Federation of Hotel & Restaurant Associations of India (FHRAI) and Event and Entertainment Management Association (EEMA) have jointly planned to organise a nationwide campaign to sensitize the general public about hotels or wedding venues not requiring to obtain any kind of licence for playing any sound recording for marriage and related social or religious functions held at the venues.

The UAE has deposited its instrument of accession to the Madrid International Trademark Registration system following Tobago and Pakistan in 2021. UAE would become the 109th member state of this system therefore trademark applicants can designate UAE in an international trademark registration as of 28 December, 2021.

The U.S. Patent and Trademark Office officially published a series of 42 newly granted patents for Apple Inc.on 13 October, 2021. These patents were granted for products such as AirPower-Type charging pad, a HomePod light-based UI on fabric and an advanced optical system for iPhones and iPads.

The US Court of Appeal’s recent decision on an appeal from the Patent Trial and Appeal Board to limit prior art for design patent applications to only analogous fields makes it easier for applicants to obtain design patents. In the case of Re SurgiSil LLP, the applicant’s lip implant tool resembles an art tool used to smooth and blend areas of pastel or charcoal drawings. Based on the prior art, the USPTO rejected the application. On appeal, the Federal Circuit reversed the decisions of the USPTO and the PTAB and held that the applicant’s claim language limited its invention to a design for “lip implants” and stated that prior art directed to drawing stumps and pencils do not anticipate a claim to a lip implant. This decision might be favorable to patent applicants but the same makes it difficult for the examiners in finding anticipatory prior art for a design patent claim.

This global technology giant has announced on 11 October, 2021 that it has received its 5th and 6th patent grants in the US. Both these patents are related to the technology of mobile fraud detection and are expected to practically prevent fraud through advertisements in this technology driven era. The company also has multiple other patents filed and pending across US, India and Singapore.

Last week EA Sports had announced that they were reviewing their name and rights agreement with FIFA. It is after this announcement, discovered that there were several trademark registrations that the company has filed in the UK Intellectual Property Office and the European Union Intellectual Property Office. According to the same, there are possibilities that the FIFA trademark would be removed from the franchise as EA sports would be trademarking the EA Sports FC.

The steelmaker has filed a lawsuit against Toyota Motor Corp. in Japan, alleging an infringement of the supplier’s patent relating to electrical steel sheets. It has also applied for preliminary injunction and is also seeking damages of around 20 Billion Yen against the world’s best automaker.

TOT a technology and patent licensing company has filed a case against Apple for infringement of two patents belonging to them in the District Court of Delaware. TOT has previously filed infringement cases against a number of tech giants including Vodafone, Verizon, Huawei, etc. The present accusation against Apple is with regard to infringing a pair of wireless communications technology patents.

The International Broadcaster Coalition Against Piracy (IBCAP) has filed a copyright suit in a federal court in New York against South Asian pirate video services branded as Desi TV and Live TV. The IBCAP claims the parties are involved in illegal sale of copyrighted subject matter and most importantly states that their actions were willful and malicious. Also the members of the IBCAP had sent them copyright infringement notices which were ignored and thus seeks an injunction against the defendants.

US Court rules Cloudfare not liable for contributory Copyright Infringement