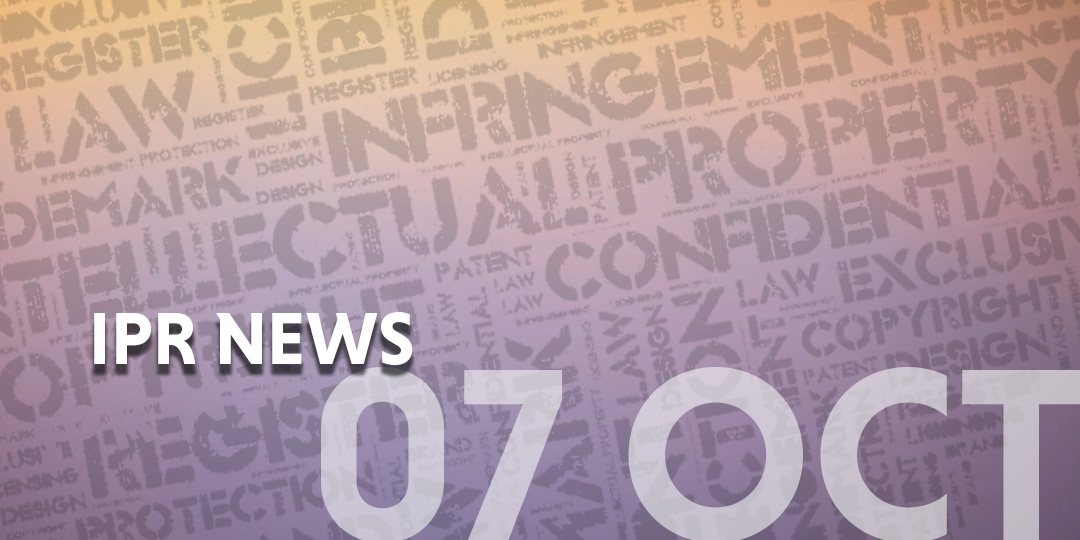 The Tribunal Judiciaire of Paris and Tribunale of Milan have found the control system which enables a three-wheeler to tilt like a regular two-wheeler employed by Peugeot Metropolis (Mahindra Group) to be infringing Piaggio Group’s patent and has banned Peugeot Motorcycles from producing, promoting, marketing, importing, exporting, using and/or possessing any three-wheeled scooter employing Piaggio’s patented technology in France. The court also imposed a fine of 1.5 million euros (Rs 12.95 crores) in addition to other penalties.

AI cannot be an inventor

Judgment dated 21 September 2021 ([2021] EWCA Civ 1374), the Court of Appeal has rejected an appeal by Dr. Stephen Thaler claiming that it should have been possible for him to name an Artificial Intelligence (AI) entity as the inventor on his UK patent applications.

Roche affiliate Chugai has moved court in India seeking to restrain Natco and MSN Laboratories over alleged infringement of its patent concerning Alecensa. The Indian firms, however, contend their actions fall under the ambit of the country’s “Bolar exemption” provision.

The Arizona federal judge found that two patents that Amazon.com Inc.’s cloud services is accused of infringing cover nothing more than an “abstract idea” and hence held that Amazon is not in violation of the same.

Cue Biopharma, Inc., a clinical-stage biopharmaceutical company announced today the issuance of two new US Patents from the USPTO. The first one covers Cue Biopharma’s first clinical drug candidate, CUE-101, and its use in treating HPV16-associated cancers. The second U.S. Patent, covers the use of CUE-101 in combination with KEYTRUDA (pembrolizumab) for treating HPV16-associated cancers such as head and neck, cervical, and genitoanal cancers.

Nazara Technologies shares rose as much as 4.35% after its arm NODWIN Gaming acquired gaming and adjacent IP business of OML Entertainment.

Amazon Games announces another partnership to create a new IP

Amazon Games is working with developer Glowmade to create a game based on an original IP, the publisher announced this week. Other details have not been furnished yet.

Netflix has announced the acquisition of Roald Dahl Story Company, a global entertainment business that manages the intellectual property and rights to Roald Dahl’s characters and stories, and their use in publishing, TV, film, theatre, merchandising, corporate partnerships, live and themed entertainment.

Cirba couldn’t convince the Federal Circuit to revive a $236 million patent infringement verdict against rival software maker VMware Inc., which had been wiped out over issues with Cirba Inc.’s standing to sue.

Amazon has permanently banned more than 600 Chinese brands across 3,000 different seller accounts, according to reports. The 600 brands were banned for knowingly, repeatedly and significantly violating Amazon’s policies.

Japanese companies urged to prepare for litigation in China

A Nikkei Asia report reflecting on litigation statistics from China has warned that foreign companies need to be ready for lawsuits as “China goes on an intellectual property offensive”. The article argues that enhanced IP legislation in China, which has led to the courts granting high amounts of damages for violations, has opened the floodgates for litigation, with Chinese companies becoming more proactive in protecting their rights.

The central government introduced Patents (Amendment) Rules, 2021 on Tuesday which reduced the fee for patent filing and prosecution for educational institutions by 80 percent.

Beijing Neu Cloud Oriental System Technology Co – a joint venture established to sell IBM server products in China – sued IBM Corp and its Chinese subsidiary in Manhattan federal court on 10th September 2021 for allegedly stealing its trade secrets. Neu Cloud said in the complaint that IBM gave confidential customer information from their partnership to a rival joint venture it later formed with another Chinese company. Neu Cloud said that it has lost market share and sales opportunities based on IBM’s actions. It sued IBM for allegedly misappropriating its trade secrets under U.S. law, seeking money damages and an injunction blocking IBM from misusing its secrets.

Federal Court opined that no specific provision in the Act has been provided that expressly refutes the proposition that an artificial intelligence system can be an inventor.

Further, no specific aspect of patent law, unlike copyright law involving the requirement for a human author or the existence of moral rights that would drive a construction of the Act as excluding non-human inventors.

A panel of the 2nd U.S. Circuit Court of Appeals heard the performance rights organization, Latin American Music Co.’s argument on whether it should have been assessed over $800,000 in attorneys’ fees for its copyright case against Spanish Broadcasting System Inc. LAMCO sued SBS, which operates radio stations in several major cities, for supposedly playing 13 songs without a license. A Manhattan court ruled for SBS, and awarded attorneys’ fees after finding LAMCO did not own the copyrights at issue and its only evidence of infringement was its president’s “incredible, self-contradictory, implausible, and evasive” testimony. LAMCO argues on appeal that, among other things, it reasonably believed it had standing because it licensed the public performance rights to the songs.

The Court concluded that the Plaintiffs had failed to carry their burden of proof and found the case to be in favor of Defendant, SBS.

The Supreme Court conducted a statutory construction analysis with regard to the Congress’s use of the term “individual” in the Torture Victim Protection Act, ultimately concluding that “[t]he ordinary meaning of the word, fortified by its statutory context,” referred to a “natural person.” Though the Act in which the term was analyzed was different from the subject in the present matter, yet the analysis of the term “individual” would apply in the present matter.

On September 20, 2021, the WIPO released the Global Innovation Index 2021.  Switzerland, Sweden, U.S., and U.K. continue to lead the innovation ranking, and have all ranked in the top 5 in the past 3 years. The Republic of Korea joins the top 5 of the GII for the first time in 2021, while four other Asian economies feature in the top 15: Singapore (8), China (12), Japan (13) and Hong Kong, China (14). China moved up 2 spots from the 2021 index from 14 to 12. India has improved its position on the Global Innovation Index prepared by the WIPO. India has been ranked 46th this year, marking an improvement from last year when it occupied the 48th position.

The present case is a suit for permanent injunction against the Defendants from infringing upon the Plaintiff’s mark, “ARUN”, and from passing-off. The suit also claimed for surrendering and destruction of the offending mark, and to render all accounts of profits and payment of profits earned, along with costs.

The Court held that the Defendants did not deceptively adopt the Plaintiff’s mark, and hence, there is no case of infringement and passing-off against the Defendants. The Court made the following observations:

The Plaintiff failed to prove a case of infringement while the Defendant has proved that they are the prior user of the mark, “ARUN” for Ghee. The Court held that prior user of a mark, even in the case of non-registration, is entitled to protection, superseding the registration of a trademark.

The Plaintiff’s mark, “ARUN” did not acquire a secondary meaning, and it is a common word, not only associated with the Plaintiff or their products.

The Plaintiff cannot claim monopoly over the word, “ARUN”, and the Defendants had been using their mark for Ghee in good faith.

The Plaintiffs have claimed permanent injunction restraining the Defendants from using the mark, “New Pattukottai Kamatchi Mess” or any other mark that is deceptively similar or identical to that of the Plaintiff, and from passing off their products as that of the Plaintiff. After obtaining the consent of the parties, the suit has been agreed to be resolved by arbitration, and Mr. K.V. Babu had been appointed as the arbitrator.