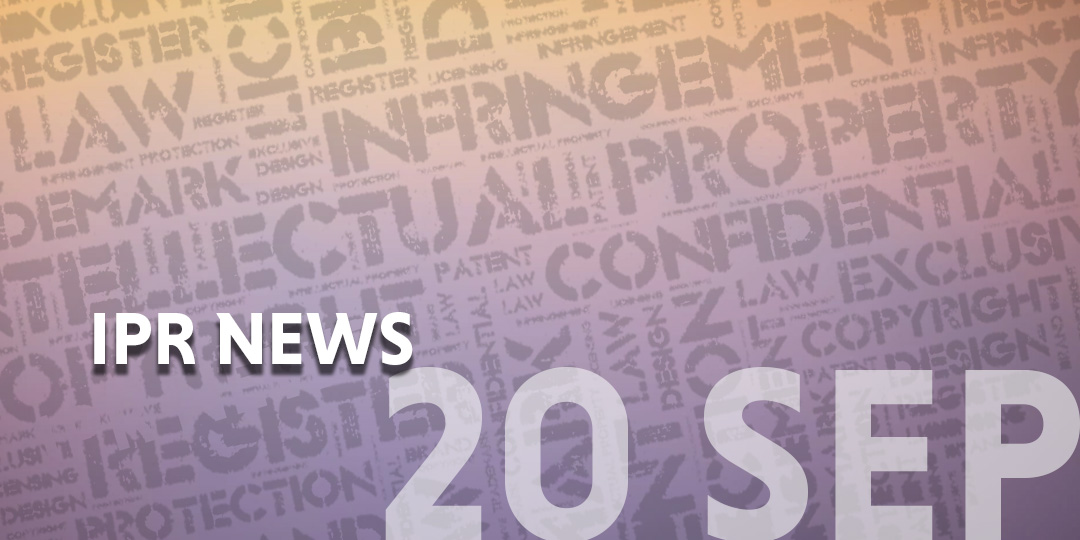 Protection of the Aaj Tak trademark

Delhi High Court granted an interim injunction to Living Media Limited, the parent company of the Aaj Tak brand and ordered Google and Facebook to block the four defendants and also extended its order to 25 different websites, carrying infringing brands.  Hon’ble Mr. Justice Suresh Kumar Kait impleaded these 25 websites and the domain registrars, the order blocks in the interim the use of  Aaj Tak Live, Aaj Tak IndiaNews, E-Aaj Tak.

The Italian luxury brand obtained an order restraining Delhi based firm Shipra Overseas from using a deceptively similar mark on the goods ‘socks’, keeping in mind the high goodwill, exclusivity, distinctiveness and unique identity attached to the brand and its products.

Luxembourg based EU Court of Justice ruled in favour of French champagne producers and against a tapas bar in Spain, regarding the use of the term champanillo which means little champagne in Spanish.

In the past, Nokia had filed numerous patent infringement complaints against smartphone brand Oppo regarding standard-essential patent (SEP) and non-SEP patents. Now, Smartphone Company Oppo has filed several 5G patents infringement lawsuits against Finnish telecommunications company Nokia in China and Europe. The reason for this infringement suit is due to lapse of licensing agreement contract signed between Oppo and Nokia which was signed in 2018.

Tesla has thought up a new way to use lasers — as windshield wipers. The US Patent and Trademark Office granted Tesla a patent on a way of using laser beams to clean debris off a windshield, and potentially other glass parts of a vehicle. The patent is titled “Pulsed laser cleaning of debris accumulated on glass articles in vehicles and photovoltaic assemblies.” The laser beams would act as “a cleaning apparatus for a vehicle, comprising: a beam optics assembly configured to emit a laser beam to irradiate a region on a glass article that is installed in the vehicle,” according to the patent.

Dr. Stephen Thaler filed patent applications on inventions related to AI, listing Thaler as the applicant and listing only DABUS (AI algorithm ) as the inventor. The USPTO determined that listing an AI algorithm as an inventor was not permitted, which was challenged by Thaler and his legal team by filing suit in the Eastern District of Virginia.

The district court also made an interesting remark  that artificial intelligence may someday reach a level of sophistication sufficient to establish inventorship, but that when that time comes it will be up to Congress, not the courts, to decide whether or not to expand the definition of inventor to include it.

A new patent for “Parallel Processing System Runtime State Reload,” has been filed and published by Tesla comprising of a system of three or more processors working in conjunction to effectively eliminate the possibility of hardware failure during the use of Autopilot or Full Self-Driving. It involves a robust system of parallel processors that can operate in the event that one of them fails or experiences a runtime state error. Accordingly, when one of the parallel processors fail, at least one other processor would be available to continue performing autonomous driving functions.

The jury verdict for Juno Therapeutics and Sloan Kettering Institute for Cancer Research (Juno) with respect to U.S. Patent No. 7,446,190  titled “Nucleic Acids Encoding Chimeric T Cell Receptors” were reversed by U.S. Court of Appeals for the Federal Circuit (CAFC) ), wiping out a $1.2 billion judgment for the entities. For the said patent that covers cancer immunotherapy technology, the CAFC found that the jury’s verdict with respect to written description was not supported by substantial evidence.

Juno had sued Kite Pharma, Inc. for infringement of the ‘190 patent through the sale of its YESCARTA product where Kite countersued, seeking declaratory judgments of non-infringement and invalidity. Jury verdict was in Juno’s favour, subsequently Kite moved for judgment as a matter of law (JMOL) on several grounds, including that the claims were not supported by sufficient written description. The district court denied JMOL and Kite appealed for the same.

A complaint was filed by Celgene Corporation in the District of New Jersey, against Biocon over potential patent infringement where Biocon had filed Abbreviated New Drug Application (ANDA) for the generic version of Revlimid (lenalidomide capsules) for an approval from the Food and Drug Administration (FDA). As per Celgene Corporation the commercialization of the same in US will be prior to the expiration of the patents that Celgene holds, and its approval would result in infringement.

The Federal Circuit affirmed the district court’s  in a Belcher Pharmaceuticals, LLC (“Belcher”) engaged in inequitable conduct by withholding prior art from the Patent and Trademark Office (the “PTO”) in an appeal from the United States District Court for the District of Delaware. Belcher’s patent was related to an injectable l-epinephrine formulation where the solution involved a new method of manufacturing a sulfite-free, l-epinephrine solution with an in-process pH of 2.8 to 3.3. Hospira sought FDA approval for a generic version, where Belcher sued for infringing the Patent where Hospira asserted inequitable conduct as a defense. Belcher had submitted a new drug application (the “NDA”) to the Food and Drug Administration (the “FDA”) related to the same subject matter prior to obtaining the patent. Further,   Belcher had disclosed prior art that was never disclosed during prosecution of the patent.

The 1st Plaintiff is the registered proprietor of the ‘JIO’ mark, series of JIO marks and all trade variants. The Plaintiffs further has 11 registrations of different domain names featuring the word ‘JIO’. Recently, the Plaintiff’s found a retailer in Aligarh, Uttar Pradesh who is engaged in selling hardware fittings and bathroom accessories under the impugned mark JIO depicted under a pirated artwork that is similar to the Plaintiff’s mark. The impugned mark further consists of a device of a leaping jaguar, thereby further violating rights of Jaguar Land Rover. The Defendant has preferred 2 trademark applications before the Registry to register the impugned mark claiming use from December 2016 but has not produced evidence substantiating the same. It was later brought to the notice of the court that the Defendant has modified the impugned mark and is now using ‘C-JIO’. The Plaintiffs made out a prima facie case and further established balance of convenience in its favour. Consequentially, the Bombay High Court observed the mark ‘JIO’ to be a well-known mark and passed an ad-interim order restraining the Defendant from using the impugned mark in any given manner.

It was announced that India’s ranking in the Global Invention Index rose to 48th position in 2020 after a record number of patents were awarded in 2020-2021 and 14.2 lakh trademarks were registered in the last 4 years.

The High Court of Delhi held the Patent held by the Plaintiff for invention entitled “Asymmetrical Beams for Spectrum Efficiency” as invalid on the grounds that the claim of the complete specifications was not patentable under the Patents Act, 1970, being non-compliant with Section 10 of the Act. The Court noted that method in which the invention is claimed, without specifying the particulars of the antennas to be used and/or of the beams to be generated, remained vague, which would give an arbitrary privilege to the Plaintiff to claim infringement.

The plaintiff approached the Delhi High Court claiming that he was the sole owner and prior user of the trademark “Rajdhani” and that the defendants trademark was deceptively similar. The court held in favour of the plaintiff and granted interim injunction preventing the defendants from using the said mark. The court further held that a delay in approaching the court was not grounds enough to disentitle the plaintiff of his interim remedy.

In a recent decision in the case of M/s Praba’s V Care Health Clinic Pvt. Ltd., -vs- M/s I-Care Aesthetic Clinic, the Madras High Court observed that there is no phonetic, visual or structural similarity between the mark ‘V CARE’ and ‘I CARE’ and also held that the only common element is the word ‘CARE’, which is generic in nature and the parties cannot claim exclusivity over the same. The court also observed that the word ‘CARE’ is a common term and publici juris as there are numerous marks containing the said term applied for in class 44. The court refused to grant injunction against ‘I CARE’ and summarily dismissed the suit filed by the Plaintiff stating that case was filed due to trade rivalry.

The Department related Parliamentary Standing Committee on Commerce, recently presented its report on review of the IPR regime in India, after analyzing the present position and recent developments, with its recommendations to the Government for establishing a robust and effective IPR mechanism in India. Major recommendations of the Committee are as below;

Intellectual Property Appellate Board, which was recently abolished by the Government, should be re-established and empowered with more structural autonomy and timely appointment of officials.

To examine the aspect on giving an expansive meaning to Section 3(d) of the Patents Act, 1970 (non-patentable matter) for giving further clarity and to avoid any misinterpretation of the said provision.

To reduce the time period of filing opposition against a trademark application from four months to two months.

To consider enacting a separate legislation or a framework for protection of trade secrets.

To undertake a comprehensive analysis and study of the Utility Models form of protection and its implementation in various countries for ascertaining their advantages to India as an alternate form of IPR.