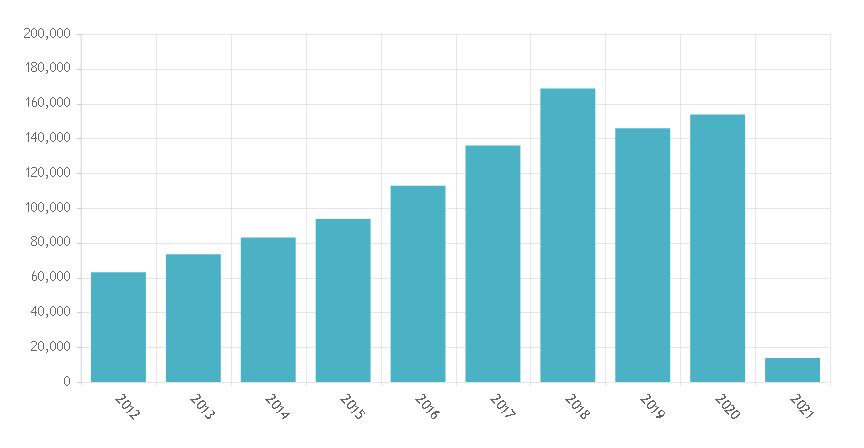 Agriculture is the process of producing food, feed, fiber and many other desired products by the cultivation of certain plants and the raising of domesticated animals (livestock). Traditionally, Intellectual Property Rights (IPR) did not play a significant role in the agriculture sector. However, in recent times, this position has changed and agriculture is increasingly seen as an industry that cannot survive without research and development, which has made it necessary that IPR in all its forms be extended to agriculture.

Patent activities in the agriculture sector

The graph above shows the patent activities in the agricultural sector since 2012, till date, all over the world. (Source: https://patentscope.wipo.int/search/en/search.jsf)

In India, research institutions and startups are expected to revolutionise the agriculture sector by deploying Artificial Intelligence (AI) and Internet of Things (IoT). It is observed that in a span of 5 years(till 2020), companies and research organisations have filed more than 200 patents in smart agriculture and crop sciences space, which has been published in the Patents journal by the Indian patent office.(Source: https://epaper.tribuneindia.com/c/48227367 published on January 22, 2020)

TAFE – Tractors and Farm Equipment Limited and Mahindra & Mahindra are leading companies in India which focus on inventions related to tractors and various agricultural / farm equipments on account of helping farmers.

What are not patentable under the Patents Act, 1970

India has adapted its patent legislation to the Trade-Related Aspects of Intellectual Property Rights (TRIPs) requirements through various reforms introduced into the Patents Act, 1970 in 1999, 2002 and 2005.Since the amendment in 2005, according to Section 3(j) of the Patents Act, 1970, “plants and animals in whole or any part thereof other than micro organisms but including seeds, varieties and species and essentially biological processes for production or propagation of plants and animals”are not patentable.Also, as per Section 3(h) of the Patents Act, 1970 “a method of agriculture or horticulture”is not patentable”.

Plant Variety Rights (PVR), are rights granted to the breeder of a new variety of plant that give the breeder exclusive control over the propagating material including seed, cuttings, divisions, tissue culture and harvested material (cut flowers, fruit, foliage) of a new variety for a number of years.The variety must amongst others be novel and distinct and for the purpose of registration, the evaluation of propagating material of the variety is considered.With these rights, the breeder can choose to become the exclusive marketer of the variety, or to license the variety to others.

In order to qualify for these exclusive rights, a variety must be: new i.e., it should not have been commercialized for more than one year in the country of protection;distinct i.e., it should differ from all other known varieties by one or more important botanical characteristics, such as height, maturity, color, etc.;uniform i.e., the plant characteristics should be consistent from plant to plant within the variety; andstable i.e., the plant characteristics should be genetically fixed and therefore remain the same from generation to generation or after a cycle of reproduction in the case of hybrid varieties.The breeder must also give the variety an acceptable “denomination”, which becomes its generic name and must be used by anyone who markets the said variety.

Geographical Indication of goods is defined as that aspect of industrial property which refers to the geographical indication referring to a country or to a place situated therein as being the country or place of origin of that product. Typically, such a name conveys an assurance of quality and distinctiveness which is essentially attributable to the fact of its origin in that defined geographical locality, region or country. Seeking protection under this act for the agriculture sector offers a strong element of cultural identification.

For example ‘Madurai Malli’, the popular jasmine flower known for its heady fragrance, has been given geographical indication, thereby gaining international reputation and bringing special fame to the temple city of Madurai.

Thus,intellectual property protectionin the agriculture sector plays an important role in the overall growth and development of the sector as well as the nation at large.